Travelling Through Morocco…By the Book 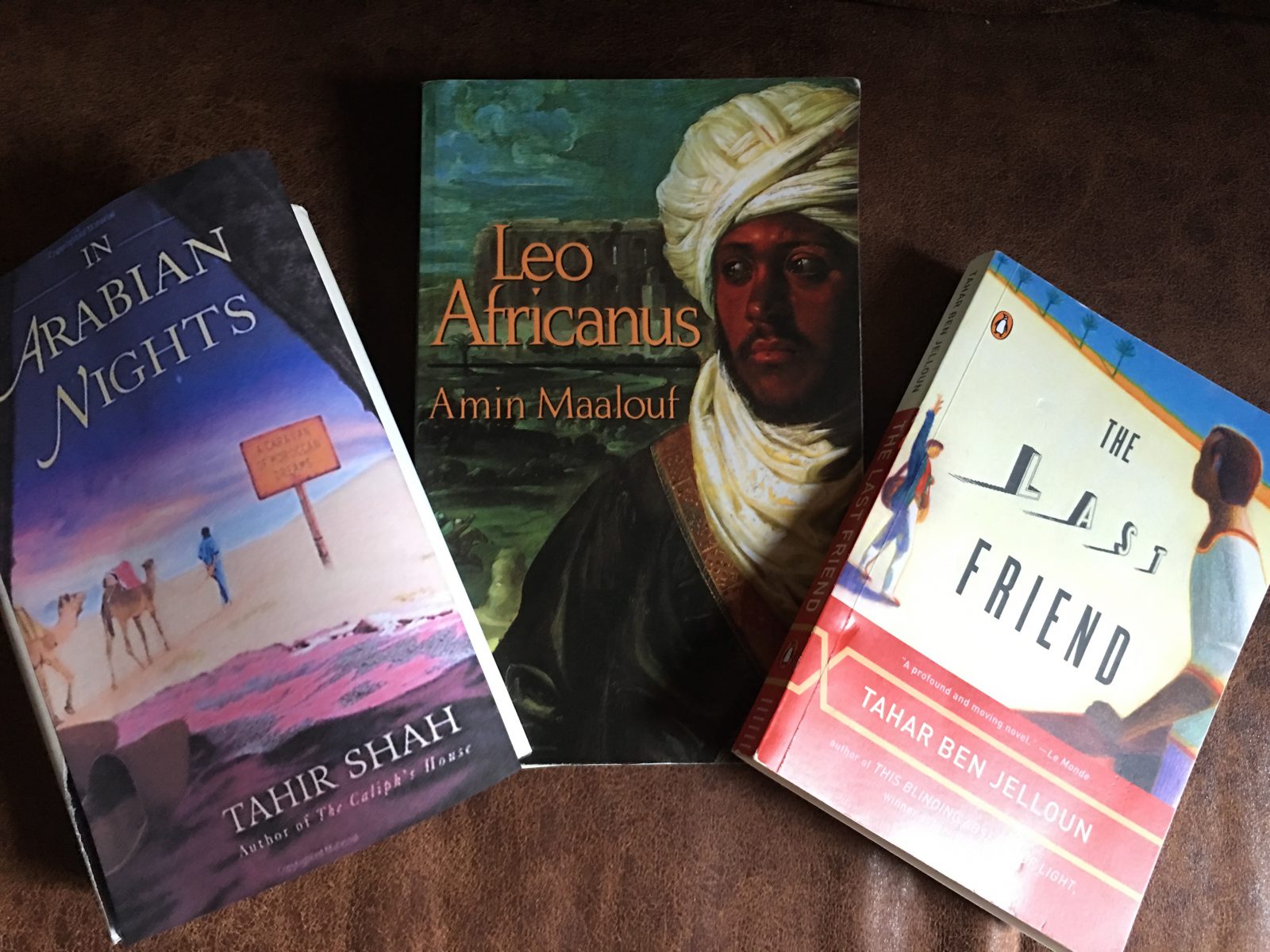 Our well-traveled family of four (two adults and two teenagers) recently spent a number of weeks exploring Morocco. In addition to our guidebook we brought along other books to enhance our travels: a combination of history, memoir, social commentary, cultural portraits and fiction relevant to our itinerary. Come explore Morocco with us as we travel “by the book.”

Our ferry from Algeciras, Spain, to Tangier, Morocco, gave us plenty of time to dive into our books detailing the fusion of Berber, Arab and European cultural influences that is Morocco. A few weeks in Spain had given us a much better understanding of the glories of the Moorish past, and whet our appetite for Morocco’s beauty, including Tangier and the northern coast, the big cities of Rabat, Casablanca, Marrakesh and Fez, and many small towns in between. 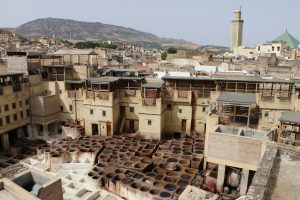 In the heart of the winding, twisting Fez medina sit leather tanneries with one of dozens of minarets in the background.

The book most fitting to begin with (and truth be told, one of us had already read it before leaving Spain) was definitely Leo Africanus (1986), written by the Lebanese writer, Amin Maalouf. It is an imaginary autobiography of the famous geographer, adventurer and scholar Hasan al-Wazzan, who was born in Granada in 1488 and whose family was forced to flee to Fez after the fall of Granada. We found this novel to be a delightful read as we traveled with the protagonist from Granada to Fez (and on to Cairo and Rome), relishing the stories of culture, religion, commerce, climate and politics of 500 years ago. While in Granada, Spain, we had stayed in the old Arab quarter of Albayzín, looked at the Alhambra from St. Nicholas Church terrace, and pictured Leo Africanus and his fellow Muslims being forced to leave their homes as King Ferdinand and Queen Isabella conquered the last Moorish stronghold in Spain.

A Moroccan medina is a city’s old district, usually walled and a top attraction in almost every town. Medinas are the hearts and souls of cities. Shopkeepers sell all kinds of goods and services, including a wide assortment of dates, a mainstay of the Moroccan diet

We spent a whole day wandering through the Fez medina, eyeing the piles of dates and assortment of sweets, haggling with a shopkeeper over the price of a ceramic tagine, and peeking through the doorway of the University of Al-Karaouine, the oldest university in the world. We imagined Leo Africanus and his friends spending their youth there, learning the Koran and heeding the call to prayer as it came from multiple directions five times a day. Reading the fictional account of a Moor added color and texture to the historic sites, architecture and art, making them that much more interesting.

Fast forward to the newly independent nation of Morocco in the 1950s. We chose The Last Friend (2004) by internationally-acclaimed Moroccan novelist Tahar Ben Jelloun (who emigrated to France in 1961), which took us on a deep cultural dive into the friendship between two men struggling to find their identities in Tangier in the late 1950s. The Last Friend shed light on this era of repression and disillusionment by giving us a very personal glimpse into the psyches of two very different men. Each narrator tells his version of the story over the course of 30 years, painting a vivid portrait of the strict life in Morocco and how they lived within and outside the rules. We felt we learned much about the psyche of Moroccan people, which carried over into our discussions and people-watching all over this bustling international, yet incr

The author’s twin daughters posing with Sultan, the lead camel for our day-long trek across the Saharan sands, which began near the coastal town of Essaouria. Riding a camel is not like a horse: One leg hangs down while the other is bent-knee with the ankle resting in front of the “handle bar”. Sultan is 15 years old and one of only two camels trained by his guide, Mustafa, using only hand signals (no reins). For the record…camels do not spit and are most closely related to llamas not horses.

Storytelling is one of the bedrocks of Moroccan society, but as outsiders we wouldn’t have known this if we hadn’t read Tahir Shah’s memoir-ish In Arabian Nights: A Caravan of Moroccan Dreams (2007). Although the book is set mostly in Casablanca, we also go along with Shah (figuratively and literally) as he travels across Morocco, including a trip across the Sahara. We visit the tailors and shoemakers of Fez, who really do work their magic with fabric and leather the old-fashioned way. We have hundreds of glasses of mint tea in small cafes in every single town we visit, but especially liked Café Hafa, set on a sheer cliff in Tangier with a dramatic view of the Atlantic Ocean. We wander through Rabat and see the rows of “men only” coffee houses and imagine them drinking bitter black coffee while having intimate conversations about people, politics and stories as described by Shah. Shah’s storytelling opened up for us another side of Moroccan culture–one of mysticism, wisdom and secrets that we only glimpsed in Marrakesh’s Jamaa el-Fna, the large square set in the middle of the medina where everyone gathers after sunset. We rode camels across the Sahara and could appreciate the barren beauty and sheer terror of being left alone in a place which changes dramatically overnight as the winds shift the hills of sand completely leaving visitors at the mercy of a guide.

At the end of journey, we all agreed that we had a much better understanding of Morocco’s past and present, and were eager to keep reading after we arrived home.

What are some of your favorite titles to read for which places?

← Traveling Through Spain …By the Book
DYK: Demand for Language Skills Are on the Rise in the Workplace? →