DYK: Demand for Language Skills Are on the Rise in the Workplace? 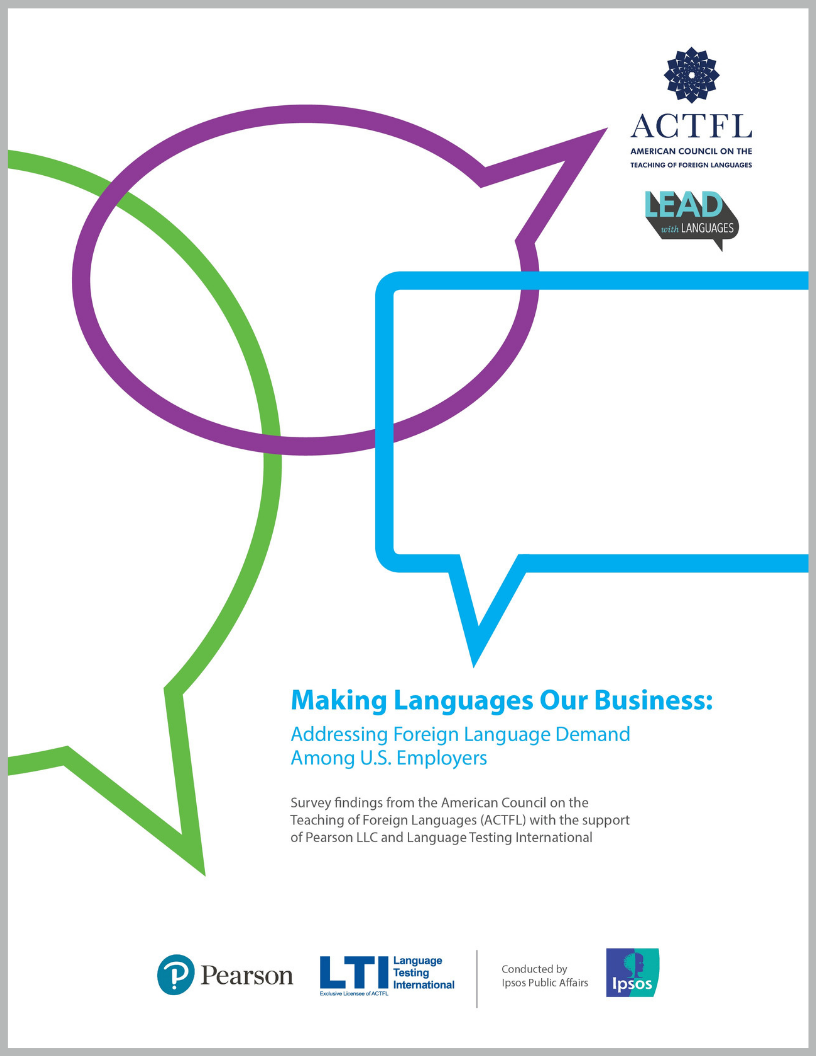 It seems the demand for language skills in the U.S. workforce is greater than ever before. In boardrooms and in the field, with customers and partners and on social media, U.S. employers today are increasingly conducting business in a language other than English. Accordingly, the ability to effectively communicate in more than one language is a critical asset for U.S. students and employees—not only in boosting their marketability in the workplace, but in helping them thrive in a global economy.

This groundbreaking industry report, based on a survey conducted by Ipsos Public Affairs for ACTFL as part of its Lead with Languages campaign, and with support from Pearson LLC and Language Testing International, includes new data emphasizing the vital need for language skills in the U.S. workplace and their impact on the U.S. economy.

How did the vast majority of news outlets miss this news when the research was released back in May?

Perhaps for the same reason that the astounding news reported by the Modern Language Association in January that colleges have shut down a “stunning” 651 language programs over the past three years slipped quietly into and out of the news cycle.

Is anyone paying attention? Shouldn’t employers and colleges get together to discuss the skills needed to properly prepare our students for these jobs?

It’s apparent that the need is there—and growing:

The report goes into detail noting that the demand for language skills is not limited to a single language, market, sector or functional department. Spanish leads as the most in-demand language among U.S. employers (85 percent), with other highly sought-after languages including Chinese (34 percent), French (22 percent), Japanese (17 percent) and German (17 percent). Ninety-seven percent of employers use language skills at least to some extent domestically, leaving only 3 percent using such skills for international needs only. And while customer service and sales come forth as the two departments most requiring language skills, a full 12 percent of employers cite a need for multilingual employees across all departments—from production finance, and everything in between.

Combined with the critical cognitive and social skills inherent in the task of language learning, this new data places those who know one or more languages–in addition to English–at an even greater competitive advantage over their monolingual peers.

Along with the survey findings, Making Languages Our Business also presents seven actionable recommendations that employers can take to build a company-wide language strategy:

All of these steps will not only amplify an organization’s own language assets but also boost outcomes to enhance the bottom line, something that I have written about for more than 10 years—since my first book, Get Ahead By Going Abroad, came out in 2007. Globally-minded organizations can take a leadership role in contributing to the development of a strong future U.S. workforce by cultivating a pipeline of multilingual talent.

For more than a decade I have been proselytizing that employers and their bottom lines stand to gain the most and therefore are necessary to include in the discussions about education policy from K-16. We must work with them to build the bridges between employers and higher ed, between higher ed and K-12, between K-12 and employers.

If we want our country to have strong national security, world-class diplomatic and trade relations, and a robust economy, we must DO SOMETHING to address the lack of language skills and language learning opportunities here. This begins with actually paying attention to news that matters: the policies, trends and anything else that will have an effect on our future and that of the young people who will become tomorrow’s global, multilingual employees working in a multicultural workplace.