Traveling Through Spain …By the Book

Originally published on Concordia Language Village’s WorldView BlogOur family travels a lot. Our global family adventures began with our twin daughters, Connie and Betty, when they were six months old. They have been part of the trip planning process since elementary school, and now that they’re 18 years old they direct and lead a lot of the adventures. My husband, Mike, a veteran travel writer, identifies the top sites to see and things to do (both well-known and little known), I set the travel schedule and arrange logistics, and the girls research what we need to know and how we should go about our trip. Most recently, we spent a number of weeks exploring Spain. In addition to the required guidebook or two (we enjoy Rick Steves’ Snapshots for big cities), we brought an assortment of books to enhance our travels: a combination of history, memoir, social commentary, cultural portraits and fiction relevant to our itinerary. Choosing the right titles can be tricky and requires research, so for those of you heading to Spain, come along with as we travel “by the book.” We spent the majority of our time in Andalucía, including Granada, Córdoba, Seville and Arcos de la Frontera, exploring Spanish culture built upon the remnants of the sophisticated Moorish civilization that lasted 700 years.

We began in Granada and so naturally, Washington Irving’s Tales from Al Hambra, a collection of essays, journal entries and historical sketches, was first up. The book begins with a chapter in which Irving describes his journey from Seville to Granada with the flourish of a travel writer. The remainder of the book focuses on the fabled palace of the Nasrid Caliphate (where he took up residence in the spring of 1829), and where we spent an entire day. It is clear that Irving was enamored of what he called “one of the most remarkable, romantic and delicious spots in the world”, and we could see why.

The Alhambra is actually a collection of four areas: Palacios Nazaríes is an exquisite Islamic building with perfectly proportioned rooms and courtyards, beautiful tiling, fine carved wooden ceilings and an abundance of water; Charles V’s Palace was added to the Alhambra after the Reconquista and includes the museum; Alcazaba is an old fort with towers and excellent views; and the Generálife boasts beautiful, manicured gardens and a summer palace. Reading Tales around the time of our visit transported us back in time and filled the palace’s empty rooms and halls with colorful stories about the Moors, sprinkled with references to his grand ideas about lost Moorish glories, including the ghosts wandering the place. The Tales stayed with us long after we left reminding us that Irving was indeed a first-rate story teller. 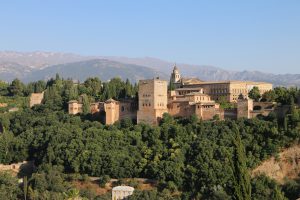 The Alhambra was built in 889 on Roman ruins, renovated and rebuilt in the 13th century by the Nasrid Caliphate and then taken over by King Ferdinand and Queen Isabella of Spain at the conclusion of the Christian Reconquista in 1492 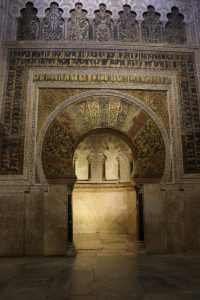 n the Mezquita in Córdoba, the contrasts are stark between the Mihrab (left) … 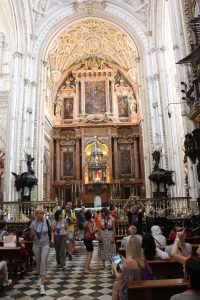 and the Chapel of the Conversion of St. Paul in the church (right), the equivalent of a high altar, in the mosque.

Modern Spain is a lot less romantic–and much more complicated–than the sunshine, siestas and flamenco most tourists enjoy. We wanted to better understand the people selling us tickets to the Museu Picasso, serving us tinto de verano in the cafes, and sitting beside us (hundreds of teens actually) at the Maestranza watching novilladas (bullfights designed to promote new talent) on a hot July evening. Ghosts of Spain: Travels Through Spain and Its Silent Past (2006) by Giles Tremlett, a journalist and resident of Spain, provides a contemporary and sobering view of a people still torn apart by the 1936-39 Civil War and subsequent repression under Generalissimo Francisco Franco. We learned about the cleaving of the population as Catholics stood by or rejected the Church’s actions during the last 100 years. And as we toured the grand Cathedrals of Granada, Seville and Córdoba–built on or near the conquered Moors’ edifices—we talked about the vein of oppression and cruelty exacted by the Church and its monarchs through the ages—and its effects on society still today. 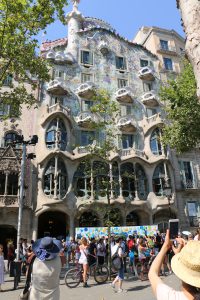 Antoni Gaudí’s presence is felt all over the streets of Barcelona from the many buildings he restored and remodelled like Casa Batlló. 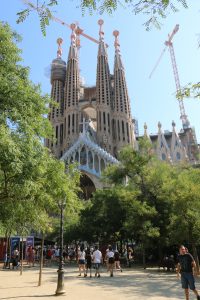 … or the still under-construction Sagrada Família, a monumental Catholic church

Barcelona was also on our itinerary, and we felt that it worthwhile to dig a little deeper into Catalan history and Catalonia’s recent bid for independence. Colm Tóibín’s Homage to Barcelona (1990) provided an overview of Catalonia’s distinct 1,000-year history, which helped contextualize Catalan nationalism and the fervent push for independence. This passion was visible throughout the city in the form of the Estelada, the independence flag of Catalonia, coupled with giant signs featuring images of the original Catalan constitution. Reading Homage also explained the passion for the Catalan language and why shopkeepers, ticket takers and restauranteurs would speak to us in Catalan first and English second, choosing not to speak Spanish. The book served as a timeless travel guide as we walked the streets and admired the architecture, art and the role famous artists—Picasso, Miró, Gaudí, Dalí, Casals–have played in this cosmopolitan city’s evolution. At the end of journey, we all agreed that we had a much better understanding of Spain’s past and present, and were eager to keep reading after we arrived home.What are some of your favorite titles to read for which places?