Tangerines and lemons are two things that are great to enjoy in the summer but did you know the origins of these words are Arabic?

This is just one example of how we can help young people understand and appreciate different languages and cultures. It’s important to realize that these lessons can happen outside of a classroom and that summer is a great time to bring them to life.

Research shows that all students lose, on average, about two months of math skills during the summer. In reading, low-income students typically fall behind by more than two months on average.

We also know that 21 of the 25 industrialized countries begin the study of world languages in K–5. By starting in middle school or later, we are unfairly preventing our young people from succeeding in the 21st century economy. 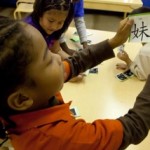 So the 90 days or so of summer are a great time to make a difference in a fun way! Here are some ideas:

All of this focus on international study, especially languages, can have a big payoff down the road.

The National Institutes of Health has released new research that found children who grow up speaking two languages are better at multi-tasking than children who speak one language. Researchers asked the children to switch between different tasks and found that bilingual children made the change faster than students who learn only one language.

Most of all, have a good summer! Or, as we say in Spanish, “¡Que tengan un buen verano!”

Angela Jackson is the founder and executive director of the Global Language Project www.globallanguageproject.org, which seeks to bring the study of international languages to elementary schools. She is fluent in English and French.