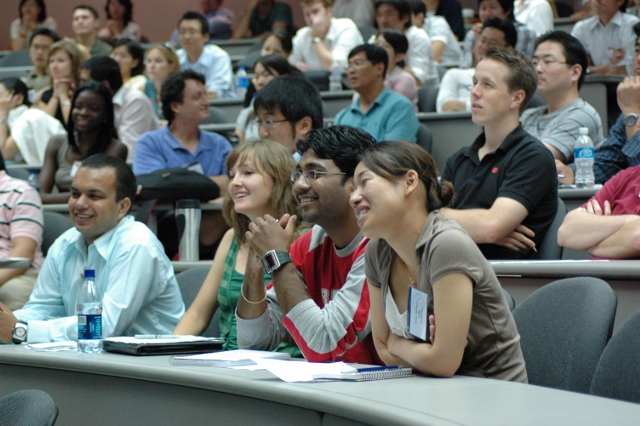 There’s a translation error in the ongoing debate on education reform across the country, including the state where I live, Connecticut. Governor Dan Malloy has talked a lot about the need to produce globally competitive students in the “STEM” fields (science, technology, engineering and math). But he hasn’t said how his recently-passed plan will prepare students to work in the global marketplace — to be globally competent.

Of course I applaud efforts toward global competitiveness. I sit on the CT CASE Committee for Workforce Alignment, and on a personal level, my twin daughters in the Glastonbury public school district excel in STEM subjects. But based on my history as a global business executive and a writer and consultant on international careers, I question whether Malloy’s plan will produce Connecticut students ready to compete in the global marketplace.

America’s schoolchildren today are regularly out-tested on math, science, history and even English scores by students from around the world. Those global students also often graduate bilingual or trilingual, armed with what experts have come to call a global mindset: the ability to operate comfortably across borders, cultures and languages. Many times they have the best of both worlds: multicultural upbringing with post-secondary education here in the U.S. Competition is fierce. By the time today’s toddlers join the workforce, the ability to work globally and cross-culturally will be mandatory — not just the “nice to have” it was years ago.

The world our children are growing up in is changing with dizzying speed. Just the last few years have witnessed a global financial crisis, China overtaking Japan as the world’s second largest economy, the Arab Spring and political meltdowns across Europe. Here at home, Connecticut businesses produced more than $16.2 billion in goods and commodities for export in 2011. Our leading trade partners are China, Korea, Germany, France, Canada and Mexico. Today’s successful workers must understand global supply chain economics, international trade and regulation, and be able to work as successfully in Hanoi as in Hartford, including managing a global team or possibly reporting to an international boss who may sit in an office thousands of miles away.

Foreign language and other types of global education are crucial for our children in the 21st century. Yet we don’t seem to be heeding the call to revamp our education systems to create globally-minded graduates who will be able to compete with multilingual, multicultural international peers. This is a country whose own Defense Department called foreign language education “an essential component of U.S. national security in the post-9/11 world,” but whose Congress has cut funds for the Foreign Language Assistance Program (FLAP), a national program that cost only $25 million, the same cost of one submarine.

How can this be? How can Connecticut, the state that, more than 50 years ago, developed a cutting-edge Russian language program in Glastonbury that has been heralded as critical to US success in the Cold War, not require any foreign language teaching at all? Thankfully, many districts take it upon themselves to include foreign language but must face potential budget cuts every year. It’s short-sighted, especially when research shows early language learning works best, and aids cognitive development beyond language arts, including STEM subjects. Why miss that window?

It seems that perhaps national security just might shake up things in education so that we may begin to properly prepare our workforce for the future. On Monday, the Senate Homeland Security Subcommittee held a hearing on Federal Government Foreign Language Skills by Senator Akaka. The two-hour hearing was alarming to listen to: The FBI, the Departments of Defense, State, Education and Homeland Security, and a variety of experts including foreign language teachers and the Institute of International Education all agreed that we do not have enough foreign language speakers now nor in the pipeline to meet our national security needs, which includes economic stability in an increasing global marketplace. Expert after expert testified to the benefits and the long-term solutions for this is not an overnight shift. Learning a second language and embracing an international education — one that teaches all subjects through a global lens — will take a fresh start, beginning as early as Kindergarten. It’s often too late to begin in secondary school or even college.

As students graduate over the next few weeks, the vast majority are woefully ill-prepared to work in an intercultural, global economy. I have witnessed this lack of international skills first-hand having spoken on university campuses across the country for the past four years. I have had countless discussions with administrators, faculty and staff about their inability to convince students to take a broader look at the world. Many worry about being able to enforce foreign language requirements because not enough students arrive on campus with enough proficiency to build toward fluency in four years. I’ve also had many discussions with business leaders who demand a globally competent workforce — which they’re not finding in abundance in American graduates. So they’re looking elsewhere. In other words, good jobs in the U.S., with U.S.-owned companies, are going to foreign nationals because American graduates lack the needed skills.

But it’s not our students’ fault. They haven’t been prepared properly by elementary and secondary school systems, systems that haven’t been able to keep up with rapid global changes. And so we must plan now and start earlier to help students before we pack them off to college. As parents, teachers, administrators, politicians and businesses, we must work together to revamp our school districts and curricula so that we graduate globally competitive and competent students who are prepared to work in the global marketplace. As one expert witness testified yesterday, “We cannot say that we’re preparing our students for the 21st century if we don’t include foreign language study.” Let’s get with the program. Our students are counting on us.

← Guest Blogger: Moving to Beijing After Graduation – A Year in Review
Why Summer Learning Needs to Include International Studies—Even for K-5 Students →