Preparing to Study in the USA: How American Football Inspired IIE’s Newest Book 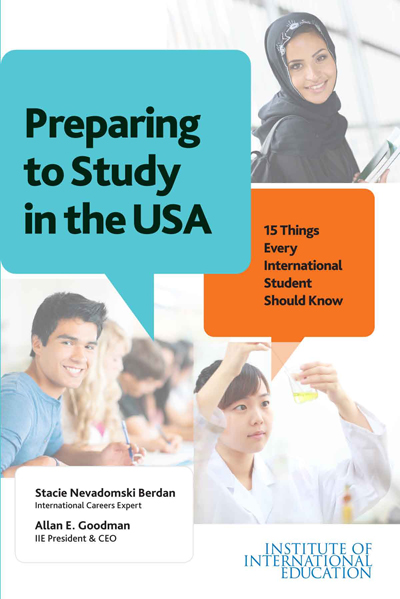 The idea to write IIE’s newest book with Stacie Berdan—Preparing to Study in the USA: 15 Things Every International Student Should Know—grew out of a football game. I was visiting with a group of international students attending The Ohio State University. A few weeks before, they were fortunate enough to be recognized by the university president and invited to watch a football game in his sky box.

While greatly honored by the invitation, none were sure what to make of it. An American friend tried to help out by explaining that seeing the game from a sky box was much better than going to a tailgate party. Because they did not know what a tailgate party was either, they asked me to explain. I said the next time they went to a football game look at all the cooking and partying that goes on in the parking lot and the people gathered around the open back doors of their station wagons. Since we do not have too many station wagons anymore, and I was not sure what you called the back side of an SUV, I was not sure what I said did much good.

The group had just two more questions. One revolved around why the players stopped playing so often. The other was why did the Ministry of Higher Education allow schools to spend so much time and resources on athletic games.

Stacie Berdan, it turned out, often had similar conversations. We discovered that there was an awful lot about American higher education that did not translate well into other cultures. This book is our effort to gather in one volume some of the most confusing things about our system as well as the culture surrounding it, and then try to explain it from the viewpoint of someone encountering it for the first time.

We welcome your feedback and suggestions about how we did and also other concepts and practices that it would be helpful to explain.

A few days after I left Ohio, one of the students got in touch to thank me for the explanations, and then to ask one more question. Everyone loved the marching band that performed at half time. What the student wanted to know is what happened to all the soldiers when the game was over? To whose army did they belong and was there a military base near the campus that housed them?

If you’re interested buying a copy of Preparing to Study in the USA: 15 Things Every International Student Should Know, go through either IIE for the paperback (US$4.99 for one copy, steep discounts for 20 or more) or Amazon for the eBook (US$2.99).

Dr. Allan E. Bookman, president of the Institute of International Education, is a leading voice on the critical need for more international exchange to promote commercial, diplomatic, scientific and cultural understanding around the globe to create a more peaceful and prosperous world for all. @iiegoodman

← Making Language Immersion Fun, Camp-style
A River, Trail, Mountain or Settlement Runs Through It: Going Global by Starting with Features Close to Home →