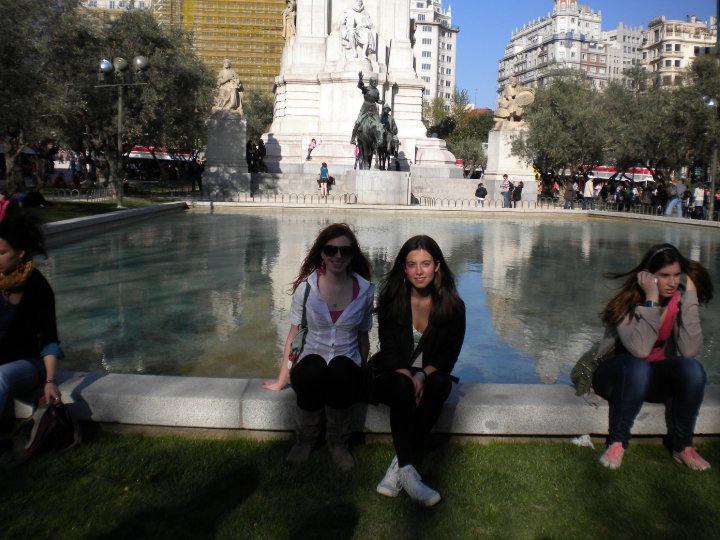 The town in which I grew up is pretty rare, in that it starts foreign language education in the ﬁrst grade. Spanish, as the second most spoken language in the United States, seems the logical choice to teach and learn. For me, this mandatory beginning of language education was also the discovery of my favorite subject. I stayed with it when the choice came to switch to French in the sixth grade, and I kept it up in middle school and high school, even knowing that it might become a burden since it was no longer a required class. When the choice came in the seventh grade to add Russian to my schedule, I accepted the offer, and found out that, while it remains my favorite subject, it wasnʼt just Spanish I had a passion for, but foreign languages in general.

Being a student at a liberal arts college in Washington DC, I hear a lot about how the knowledge of foreign languages can help with networking, advancing careers, etc. But the truth is, it is beneﬁcial long before the time comes to go to college and get a job.

My freshman year of high school, I met one of my closest friends. We bonded over the fact that I learned 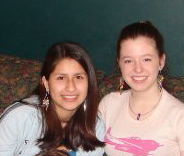 Beth and a friend, freshman year

a lot more Spanish from her than from our half-crazed teacher, doctorate or not. She became a part of my group of friends, and my knowledge of Spanish helped me ﬁt into hers. When she moved back to Peru, speaking her language helped me to keep up with her life and update her on mine through Facebook. My senior year of high school, my interest in Spanish got me a last-minute (and by last minute, I mean two weeksʼ notice) spot in the Spanish exchange. The program was two weeks long, and each student got to live with a host family in Madrid and divide their time between attending school with their exchange student and sight-seeing. The catch was that everyone else in the program had already had their exchange student come visit for two weeks in the fall, whereas I would be meeting mine for the ﬁrst time in a foreign country. Much to my surprise, I adjusted to life with a family of strangers fairly quickly. Twelve years of studying the language and culture of Spain prepared me more than I would have imagined.

Among all of the slang and regional phrases that I learned, there is one that, while it may not be the most important, Iʼm sure I will never forget. 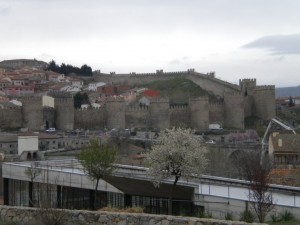 Ávila, Spain, from a distance

It rained the day we went to the city of Ávila, and, in case the past paragraph has made me sound even slightly worldly, Iʼll admit right now that I had no clue what the weather was like in central Spain in April, except for the vague idea that it would probably be warm. Rather than check the weather, I packed accordingly and found myself wearing a thin, long-sleeved shirt that was somewhere between a T-shirt and a sweatshirt that day. Thanks to my being the stereotypical teenager that thought I knew better than my parents, I ended up with one of those irritating viruses that never seems to go away.

There were still soothing medicines I could take, and it was easy enough to ﬁnd what I needed, having learned not one but two words for “cold” here in America: there was the traditional word “resfriado,” which could be found in the any dictionary, or, if you wanted to sound Latin American, you had the option of “catarro.” There was, however, one way of expressing my illness that I was not prepared for: after several days of walking around the house coughing, sneezing, and snifﬂing, I woke up one morning, went to the kitchen for breakfast, and found my exchange studentʼs father sitting at the table, who asked me, “Beth, estás constipada?”

Iʼd been living at the house for about a week at that point, but I still wasnʼt nearly comfortable enough  to be discussing what I thought he was asking, so I settled for asking, “Que?!” in a tone of awkward surprise.

Luckily, my exchange student entered the room at that point, and explained to me that the word “constipada” actually refers to the tight feeling in your chest that comes with having a cold, and she made sure to tell her father what the false cognate in English actually meant.

Beth shares a relaxing moment at a fountain in Madrid.

Learning foreign languages and cultures clearly changed the course of my life, even in high school, by allowing me to travel and explore, with a genuine understanding of what I was discovering. The impact of my studies on my college admission process and course of study in college cannot be overstated. There is no question in my mind that such a long study of Spanish, along with the fact that it got put to use traveling, as well as knowledge of a critical language like Russian were a huge help getting into college. In fact, I picked my school based on the fact that in the premed program I was required to choose another major, so I could do both of the things I love: science and languages. That is how I ended up the only Spanish major on the premed track.

Iʼve pretty much surrounded myself with BioChem and math majors, so naturally I get asked a lot what my major has to do with the track Iʼm on, or how it will help me become a doctor. My short answer is that it might not, but it will at least be a talking point in the interviews that come with applying to medical school. If I have more time to explain, Iʼd usually point out that itʼs pretty difﬁcult to ﬁnd a hospital where every patient speaks only English, and therefore a doctor who doesnʼt need an interpreter might be an asset.

Iʼve also become interested in a Doctors Without Borders career, which would involve spending time in another country, in which case knowledge of another language would not only be helpful but could possibly be a necessity. I hope to use the Spanish degree I am pursuing directly by working in Latin America. Another option available to someone pursuing a degree in Spanish is to take the test to become certiﬁed as a translator, which may provide a lot of extra income during grad school.

Through all of my experience with learning foreign languages, which may not be much given how young I am, Iʼve found that the usefulness of learning them is often underestimated. They can be found in the most unlikely places, such as in my case where I surprised my coworkers by eavesdropping on them while they were talking about me at my job. It appears that they will even be useful in the science-based career that I am hoping for. For what my opinion is worth, anyone who has the opportunity to learn any language should seize it.

Beth is a freshman studying Spanish and science at American University.  Her career aspiration is to be part of Doctors Without Borders or a similar organization, preferably in Latin America. This would allow her to combine many of her favorite things: traveling, languages, science and community service.  Beth is one of Go Global!’s founding contributors. You can check her out in the soon-to-be-released Go Global! Launching an International Career Here or Abroad.