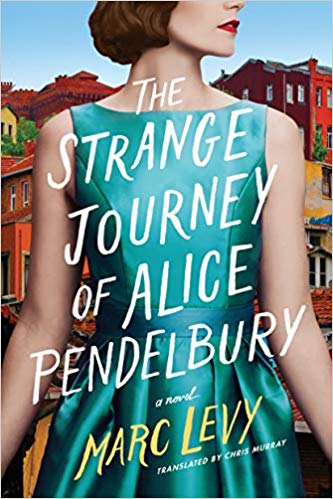 I’ve read a lot of books this summer. Many from the list of “Globetrotting” put together by the New York Times published in January.

Sometimes it’s really nice to get lost in the lives of the characters in a novel. That’s just what happened to me when I started reading The Strange Journey of Alice Pendelbury, a delightful, circuitous and unexpected story written by Marc Levy, France’s most-read novelist.

The story follows Alice, a 39-year old British woman, who lost both of her parents in an air strike during the war. The house she grew up in had disappeared overnight along with her mother, father and all of their belongings. It’s now 1950, and Alice has made a new life for herself with a close group of friends in London. She has a profession she loves: She is “a nose”—she has an acute sense of smell–and she blends fragrances to sell to London perfume shops. She lives and works in a drafty flat and has regular encounters with her cantankerous neighbor, Doldry, who is a painter, disapproves of her loud gatherings and covets her flat’s skylight.

Alice and her friends go on a daytrip to Brighton, where she encounters a fortune teller’s caravan. Alice’s friends persuade her to have her fortune read. The strange old woman insists that she has seen Alice’s eyes before and that she carries a story without even realizing it. She also tells her that the man who will be the most important in her life was walking right behind her that night, but that she would need to meet six other people first before she would find him—and the amazing journey would take her to Istanbul the city of her birth. Alice brushes this off as nonsense knowing for certain that she is a British citizen. But she can’t get the idea out of her head.

As she mulls this over, she develops an unlikely friendship with Doldry and with his help, they set off on an evocative and exotic expedition that sees Alice traveling through post war Europe to the mysteries of Turkey. The reader is taken along through a world of different scents, cultures, experiences and histories challenging Alice to discover who she really is.