Thirty years ago today, tanks and soldiers turned a peaceful student demonstration in Beijing’s central Tiananmen Square into a massacre. While the Chinese government has claimed that no one died, the death toll is likely almost 10,000. And hardly anyone there knows about it. If there’s one thing that China is good at, it’s covering up its own unsavory history.

Four years ago, I took a class on modern China in high school. That was when most of the kids in the class learned for the first time of the government’s actions in Tiananmen Square. While I couldn’t fault the American students for their lack of knowledge, I was shocked to learn that several of the Chinese students had never heard of this event. These students lived in Beijing and Shanghai; they returned to China for vacations; they grew up in their country’s educational system until high school. Yet, they weren’t aware of a violent day that shook the rest of the world — one when their parents weren’t much older than the student protestors.

How could these smart people be so oblivious to their country’s recent past? Throughout my seven years of Chinese language and culture classes, this question stuck in the back of my mind, making me wonder what made the Chinese so different that they were able to completely abrogate major events from their history. Censorship and communism couldn’t be the only explanations. It wasn’t until my third visit to China that I finally found an answer. 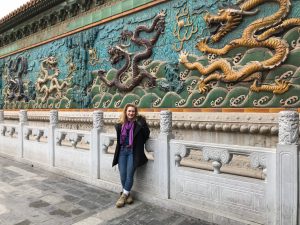 Betty inside one of the 90 palaces of the Forbidden City, Beijing.

A year ago, I visited my friend and her family in Shanghai. Wanting to show their country to an interested foreigner, they packed me up and toured me around Beijing. We waited in lines to get into every palace and historic site, with passports in hand to enter Tiananmen Square. In all of my learning about China, I couldn’t picture the enormous size of the square. It was difficult to imagine the centuries of history in the place I stood in, looking up at a giant portrait of Mao while soldiers marched by. With the Forbidden City behind me, it seemed easy to forget about a day in 1989 when centuries of other historical events occurred in the same place. Instead of recalling the carnage of one day, there was a better history to remember: this one was an easy one to forget.

Through broken Mandarin and English translations, my friend and her parents explained a Chinese perspective I couldn’t have begun to understand in the classroom. As they defended communism, Mao and censorship, they explained that they had what really mattered: comfort and happiness. They knew that the government hid things from them, understanding that there was information they weren’t allowed to know and atrocities that were covered up. To a democratic westerner, this seemed unacceptable, undemocratic — almost inhumane. But they explained that they lived good lives in a country where they didn’t have to worry about politics or the challenges of daily life. Like any others, their country wasn’t perfect, and its past had its blemishes in order to create a smoother future: a future they were living in and enjoying.

Even if I can’t agree with the Chinese about their acceptance of the government’s covering up the truth and lying to its people, I can understand wanting to not worry about the government every day. Here in the US, I look at how politics is destroying our daily happiness, and how it might be easier to be as uninvolved as the Chinese. At the end of the day, we’re too culturally different to fully accept and understand each other’s politics, but those glimpses into opposing perspectives have allowed me to finally start to see the Chinese peoples’ point of view on an event I could never explain as just an American. Above all, I have learned that there is tremendous value to understanding another culture by trying to see a person, an event, history and a culture from another perspective. All of the time I’ve spent immersed in another culture with hosts has reinforced the belief that different is not bad; it’s just different. 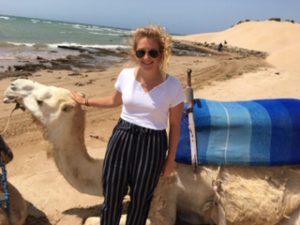 Betty Berdan is a rising sophomore at Georgetown University. She has studied Chinese for more than seven years, and has traveled to China multiple times to study abroad and visit friends. She is proficient in Spanish and loves to experience other people, places and cultures.