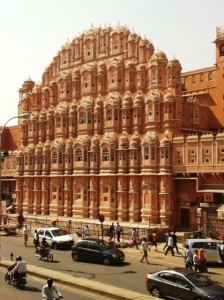 I’ve always wanted to see India and recently had my first opportunity to take a business trip there. In my role as U.S. Global Mobility & Immigration Leader for Deloitte, I frequently work with teams and colleagues in our Hyderabad, Bangalore and Mumbai offices.  I was keen to make the most of my 14-day experience and take full advantage of the opportunity and everything it had to offer.

Arriving at the Hyderabad airport at 1 am after a long trip, I quickly and surprisingly made my way through customs, baggage and immigrations.  Not sure of where to go, I kept walking…right outside where I was greeted literally on a ‘red carpet’ by a hundred or so smiling Indians!  My driver was there and whisked me away to the Westin Mindspace in ‘Hi-Tech City’. I hardly knew I was in India with the sea of brand new shiny metal buildings including the likes of Deloitte, Novartis and Accenture (just to name a few).  My first ‘aha’ moment was the intense security checks surrounding each building including the hotel – just part of daily life I suppose.  Up in 4 hours, I was wide awake.  I quickly managed to find the French press to make some coffee, check U.S. emails, call home and hit the gym.  My second ‘aha’ moment was at the gym where I watched a jogger complete at least 100 laps around the pool while looking out the window. Running the streets of Hyderbad does not seem to be common.

At the office I bumped into the Talent Director who said I’d probably last until 3pm, when I was to meet him. I made it but not without downing the super-charged high-energy drink, Advocare, that I brought along to keep me awake. He advised me to stay up as long as possible to beat jet lag and so felt obliged to say, “you MUST come to our home this evening to celebrate this very special occasion of Dussara  with us.” I didn’t know how I’d make it.

But I couldn’t miss it! So I kept drinking Advocare and kicked myself into gear, leaving for his home about 6:30 pm.  It was an amazing experience. We gathered in his home with his wife, where he began by explaining the significance of the holiday and tradition of ‘the dolls’, its celebration of women, and how they had opened their home to others all week (the holiday lasted for ten days).  And to put it into perspective: He had invited more than 75% of the office to come by – which they did over the course of the 10-day festival. Guests viewed the amazing collection of dolls and sang one beautiful, lyrical song after the other while our gracious hosts served what I would call Indian biscuits and juice.  As people left, they were each given a small gift. My gift was the opportunity to participate in a lovely celebration that further opened my mind to this incredible culture.

I decided to take advantage of the holiday and go south to Kerala for the weekend. While driving to old Fort Cochin to do some shopping, I sat up and took notice in the back seat of my car as we dodged cows, herds of goats, and bicycles all over the road.  The horn is apparently a way of life, and I thought how resourceful it would be if someone would invent personal horns for the people walking alongside these roads (we could call them ‘India-a-gogo’) — or at a minimum, personal blinkers. In Fort Cochin, I concluded that we weren’t going to a mall but a series of shops that looked very different from home. I am an efficient, no-nonsense shopper: One of those people who knows what she wants, doesn’t ask for help, goes right to it, doesn’t try it on, buys it and leaves within 30 minutes. No idle chit chat or browsing for me!  I quickly realized that my shopping style wasn’t go to fly here. I would probably be in this shop for a few hours…and I was.  As I took in all the beautiful, colorful things in the store, meticulously folded and packaged, I didn’t know where to start – or even what I was looking for!  But no worries, help was in abundance in the store, and I learned how to shop, the Indian way. I accepted the merchant’s offer for chai, sat down, and began to enjoy package after package being opened for me strewn across the shop.  I then realized I needed to ask for prices for there were no tags. The first price given was astronomical and, since I had been counseled a bit, I countered at 70 percent less. The shop keeper laughed, and we haggled back and forth until we were both satisfied – and I exhausted! I’m sure I paid too much for the Pashmina and other purchases but I had a grand time.

Southern India has some of the most beautiful scenery in the world. Kerala, known as the land of coconuts, is lush, with green briny backwaters that come in from the Indian Ocean. It’s also home to some of the best Ayurvedic centers in the world. I stayed at the Kumarakom Lake Resort in Kottayam, Kerala and took treatments at the 200-yeard-old Ayurmana, the original home of Ayurvedic practitioners, and soaked up the culture as I watched a local potter make a Ganesh wall hanging for my daughter and a local weaver make a pocketbook for my daughter. I also dined on exquisite food: The region of Kerala serves plenty of seafood and coconut-based foods, such as Meen Pollichathu, a signature dish of local Seer fish cooked in coconut milk with spices in served in a banana leaf and served with Appam (yummy thin pancakes!).  Dessert was even better – A tender coconut soufflé – a mélange of coconut extract with cream. Not exactly the kind of soufflé I had in mind, but it was delicious just the same.

During the work week, I shuffled back and forth between offices across Hyderabad. I adjusted my schedule to local time, often eating lunch closer to 2:00 and dinner closer to 8:00.  Traffic is clearly a challenge, I called it organized chaos, and somehow it all worked out.  This is not only true for driving but standing in lines, too, which are more like calls where everyone merges in until you ultimately get to the front. I even picked up the head bobble, nodding side-to-side, to show understanding or agreement, but was sensitive to how tricky it can be to speak the same language – but have completely different meanings.

On my second weekend, I took a road trip north to Jaipur with a colleague because a relative had given me a few tips on what to see and shared that we would be there during full moon.  And we DID see moon over Jaipur, the glorious pink city of Jaipur!  But before Jaipur, our first stop was the Amber Fort which was an incredible feat of construction. We wandered around this historic site, known for its unique blend of Hindu and Muslim architectural styles. We even saw snake charmers! In Jaipur, we stayed at the Raj Palace,one of the Heritage hotels (I decided if I wasn’t going to get to see the Taj Mahal, I was definitely going to stay in a palace).  Beautiful.  We checked out some of the local bazaars and the Gem Palace and marveled at how much crazier the traffic was here! Probably 30 minutes to go 3 miles. We saw the Jantar Mantar celestial observatory and the Hawa Mahal pink palace.  It was fabulous and for anyone traveling to Jaipur, I recommend Fiona Caulfield’s “love travel” books.

The trip was amazing, and I’m so glad I took it.  I started to read the White Mughals, by William Dalrymple wanting to fully immerse myself into Hyderabadi culture and history.  It helped me quite a bit to not only understand Hyderabad, but also gain an appreciation for the culture, religion, history and evolvement of the city.  It’s a long book and I’m still working through it but it takes me back to my time there. And, now that I’ve been to Jaipur, I am so jealous to hear that there will be a William Dalrymple festival in Jaipur in January!

Travelling to India, being there, was not easy, and definitely not for the faint of heart or health.  You must enter with a different mindset and accept what is India.  The poverty and conditions are so extreme that it can be somewhat challenging to focus on the beauty that India has to offer.  Chivalry is clearly dead (or perhaps never was), and organized chaos seems the norm for traffic and queues.  Not sure how the system actually works, but interestingly enough it does.  All of the cultural differentiation would drive some crazy.  But for me, I was enamored with the people, the culture, the color, the shopping, the love and appreciation for animals, the change from geography to geography, the myths/the lore, the language and more.  I can’t wait to go back – so much to see.  Namaste!