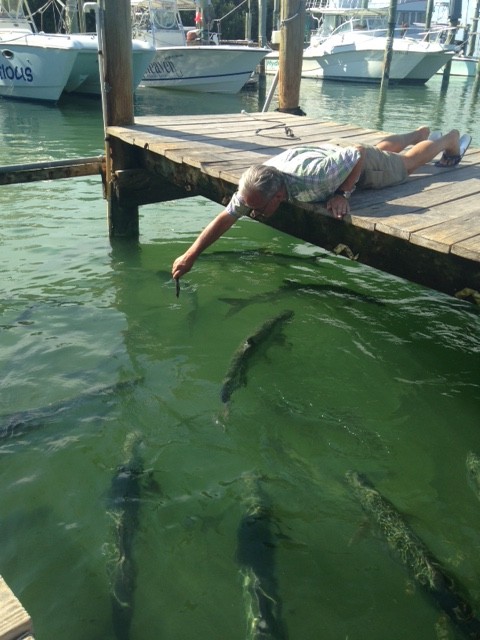 In its 113-mile journey from Key Largo southwestward to Key West, Florida’s Overseas Highway never fails to delight the senses of sun-starved snowbirds with sparkling blue and green tropical waters, lush tropical vegetation, and seemingly endless sea and sky vistas. Nor is the roadway itself anything less than spectacular, traversing as it does three dozen, narrow, low-slung islands and 42 causeway bridges, the longest of which is nearly seven miles.

But in their enjoyment of the trip and their eagerness to get to hip and happening Key West, most travelers overlook the many worthwhile sites along the federally-recognized All-American Road that also serves as the inaugural stretch of U.S. Route 1, sites that are much more representative of the truly unique ecosystem and culture that is the Florida Keys. Profiled below are ten of the more worthwhile stops to consider the next time you head off into the tropical sunset.

The best place to see the continental US’s only living barrier reef, which lies 3-8 miles offshore, is at America’s first undersea park. And if you’re not a certified diver, the best way to do it is via a 2 ½ hour ($29.95 adults, $24.95 under 18) or 4 ½-hour ($38.95 per person) snorkeling tour (equipment not included) or a 2 ½-hour glass bottom boat tour ($24 adults, $17 ages 4-11). Likewise, you can explore the park’s 50 miles of mangrove swamps via rented canoes, kayaks, or paddle boards. Onshore attractions include nature trails, two beaches, and a 30,000-gallon saltwater aquarium. (Note: the iconic Christ of the Deep statue is accessible only on snorkeling tours.)

Film buffs of a certain age will enjoy checking out the original 1912 “African Queen,” the 30-foot steamboat that starred (along with Humphrey Bogart and Katharine Hepburn) in the 1951 movie of the same name. 1 ½-hour canal cruise ($49), 2 ½ hour dinner cruise ($89 though dinner is not on the boat.)

Until the hurricane of 1926, these small, yellowy limes were indeed grown commercially throughout the Keys. Now most come from Mexico, but that doesn’t stop local entrepreneurs from cultivating a veritable cornucopia of Key lime products, including candies, cookies, ice cream, tea, jelly, candles, and of course Key lime pie. This colorful, low-key roadside emporium offers a wide selection at very reasonable prices.

Lured onwards by the evening and night life in Key West, most motorists don’t even consider overnighting anywhere else. What they end up missing is the opportunity to recreate at will and at length at dozens of all-inclusive beachfront resorts. (“All-inclusive” refers to amenities such as swimming pools, tennis courts, kayaks, paddleboards, snorkeling equipment, and bicycles, NOT food and drink. Jet skis and sailboats are not included and there’s invariably a resort fee.) Among the best family-oriented options are the Pelican Cove (305-664-4435) and Postcard Inn (305-664-2321) both on Windley Key; the Chesapeake Beach (305-664-4662) and the Cheeca (305-664-4651), both on Upper Matecumbe Key; and the Caribbean-style (and sized) Hawks Cay (305-743-7000) on Duck Key, which even has its own dolphin encounter.

For 70 years now, Theater of the Sea has been entertaining Overseas Highway travelers (and especially those in the back seat), with its stunt-studded dolphin, sea lion, and parrot shows. Beginning in 1987, they began adding interactive encounters, first with dolphins, and eventually with sea lions, rays, sharks, and most recently, sea turtles. General admission to the grounds and all shows: $31.95 ages 11 and up, $21.95 ages 3-10. Encounter prices vary, but the most popular dolphin ones run $195 to swim, $180 to wade, and $85 to meet (you don’t get in the water). Similar marine mammal encounters can be had at Dolphins Plus, Key Largo (MM 99.5 oceanside and MM 102 bayside); 305-451-1993, dolphinsplus.com; and the Dolphin Research Center, Grassy Key (MM 59 bayside); 305-289-0002, dolphins.org.

Much of the Keys’ early wealth came from salvaging wrecks, and this quirky but comprehensive museum traces the 4,000-year history of diving and underwater exploration in all four aspects: military, commercial, treasure, and recreational. Among the many fascinating exhibits are a replica of Edmund Halley’s 1691 diving bell, the Mark V Navy helmet, and some of the 18th-century finds of local treasure hunter Art McKee. Admission: $12 adults, $6 ages 5-11

The Keys are full of waterfront dining opportunities, but few can hold a Tiki torch to the charming white-sand beach and wide open views out over island-studded Florida Bay offered at these two upscale, adjacent sister properties in Islamorada. Take your choice of the two verandahs at plantation-style Pierre’s or dine right in the sand at the Beach Café. Both are especially appealing at sunset. Dinner entrees: $26-55.

Serious anglers come to Robbie’s for some of the best sport fishing in the country, but fun-loving tourists stop by to eat at the Hungry Tarpon Restaurant, shop at the open air market, and hand feed the 2-5 foot-long domesticated tarpon that congregate under the public dock. (Admission to dock $1, bucket of bait fish $3.) Also available are snorkeling tours and a 2 ½–hour excursion to deserted Indian Key Historic and Lignumvitae Botanical State Parks ($37.50 per person plus a single $7 state park entrance fee).

Among the Keys’ most naturally attractive and best maintained beaches are the three of 524-acre Bahia Honda State Park, which allow for swimming, snorkeling, and extended beachcombing on both the bay and ocean sides. You can also venture out high over Bahia Honda Channel on the original 1912 rail bridge, which was converted to cars in 1938 before being retired (by having two sections removed) in 1972. Entrance fee: $8 per vehicle

The visitor center for this sprawling, 25-island refuge devoted to preserving the endangered Key deer, a variant of the Virginia white-tailed reduced by the harsh environment to the size of a large dog (roughly 45-75 pounds), is located in the Big Pine Key Shopping Center. To actually see some deer, however, you’ll need to walk one of the two nature trails (Jack C. Watson and Blue Hole) located north on Key Deer Avenue or cruise slowly through the nearby residential areas on Big Pine and No Name Keys. Free.