Investing in Women Pays Off for Business

Ah, the “mommy wars.” The kerfuffle between Hilary Rosen and Ann Romney this past week has once again side-tracked national attention into the ongoing debate over women’s choices. Does working for pay hurt or help us as moms, hurt or help our kids? Really? We’re still debating this as a nation? This in the same week that President Obama’s White House Forum on Women and the Economy heralded the crucial impact women make on family, economics, growth and competitiveness in America via full participation in the economy and society.

President Obama’s comments apply to women around the world — not just in the United States. This topic was addressed at “Why Organizations Need to Invest in Women,” a panel discussion with international women recently held at George Washington University and sponsored by the university’s Center for International Business Education and Research (GW-CIBER), an event we organized and moderated. We discussed that while investing in women certainly yields positive outcomes in terms of human rights, education, and family planning, there is an even more compelling reason to invest in women. It makes good business sense. 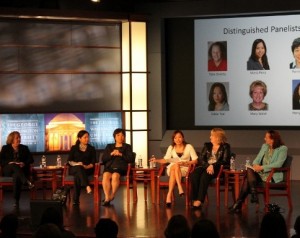 For example, 40 percent of the world’s workforce is female. Women in the boardroom have proven to provide a competitive advantage for businesses’ bottom lines. The input of diverse decision-makers is a boon for organizations in all sectors of the economy: public, private, and NGO.

Women also manage money well. A recent study by Barclays Wealth and Ledbury Research found that the conservative approach that most women take in investing generates greater long-run financial payoff. That is because women are more likely to buy and hold, rather than make higher-risk investment choices and frequently trade. In recognition of both the financial and social benefits of lending to women, most micro-lending institutions aim the vast majority, if not all, of their lending portfolio toward the female borrower.
The International Finance Corporation has noted that the financial power of women is expanding at a more rapid rate than ever before in human history. They estimate that global consumer spending by women will increase to $28 trillion in 2014, up from $20 trillion in 2009. This is particularly noteworthy given the fact that women already control 65% of global spending today.

Women have a multiplier effect as consumers, building markets as they make the majority of purchase decisions in households. Women tend to focus on purchases that increase family welfare, strengthening the consumer base. Yet surveys consistently find women feel underserved and patronized by many of the companies trying to sell to them. Women’s power as global producers and consumers has been compared to that of China and India because, over the next decade, the impact of women the world over will be at least as significant as that of those two growing global powerhouses.

Who better to understand and meet the needs of these 1 billion women around the world than women? Women understand women.

It is time organizations began recognizing the immense payoff that women offer not only in the United States and in the industrialized nations around the world but also in emerging and developing economies.

In the next 50 years, the majority of worldwide economic growth will take place outside the industrialized nations. Organizations that are able to understand and navigate the dramatic and rapid changes taking place in these economies will be best positioned to recognize and seize opportunities.

Women employed in these markets can help their organizations keep up with the rapidly changing and expanding role of women in these societies, identifying new opportunities to market to female consumers and to mentor and nurture women leaders in these contexts. In other words, investing in women leads to greater global returns as women tend to invest in other women.

It is time more organizations invested in women internationalists so that more women can fully participate in next-generation global leadership. It is time more internationalist women started leading the teams trying to understand what women around the world want so that they can better serve the women who continue to be their most important sales market.

President Obama’s focus on women is right on target and has implications for the world economy. Investing in women has a multiplier effect for economic growth. Since we know investing in women pays off, now it is time to put our money where our knowledge shows it will be most effective — in women.

Liesl Riddle is the Associate Dean for MBA Programs and is an Associate Professor of International Business and International Affairs at The George Washington University.

← Guest Blogger: One Recent Grad’s Leap Abroad
Learning 2 or 20 Languages: Is There a Secret? →