A Whale of a Shark Story: Swimming with Gentle Giants of the Sea 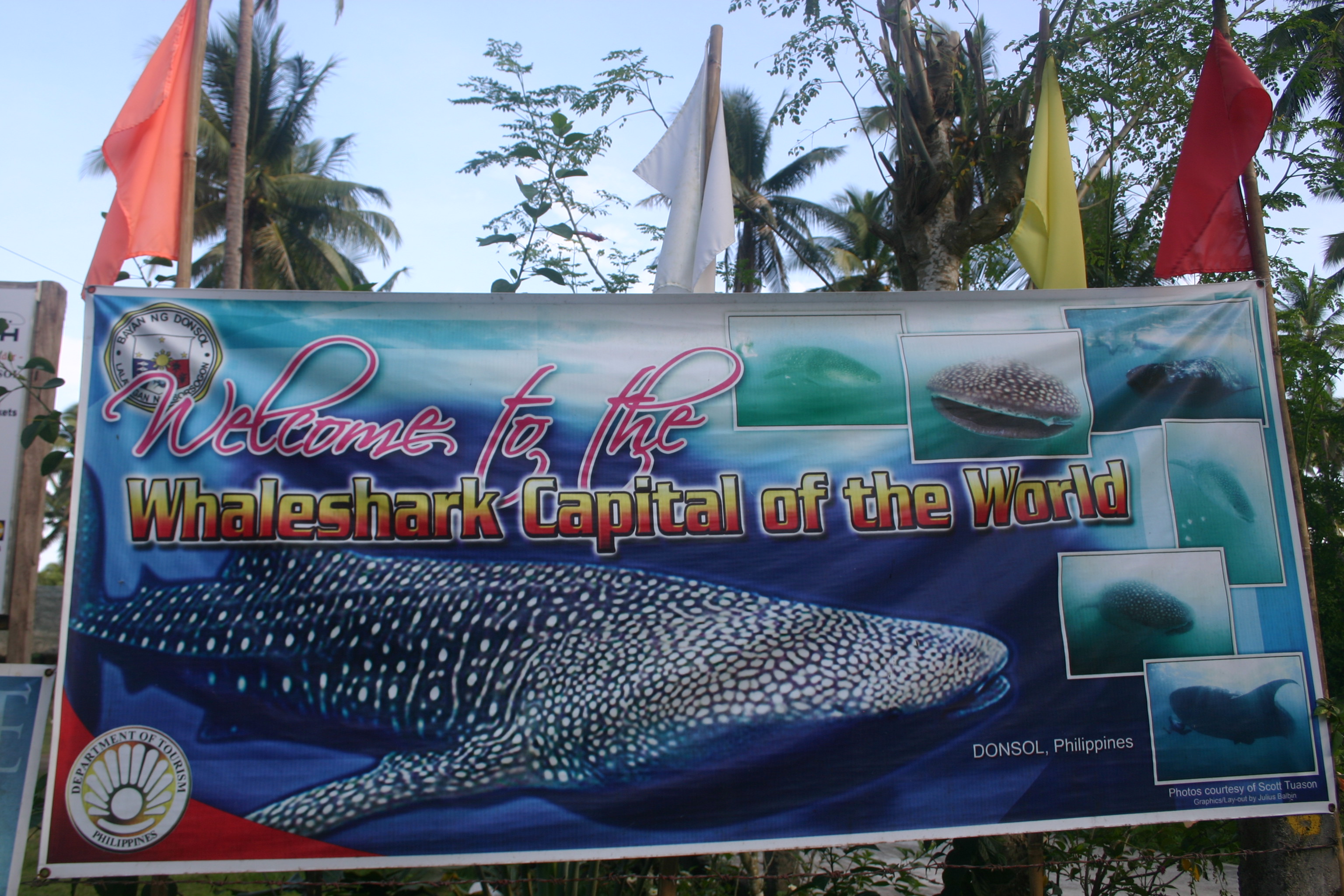 By our third encounter, we had complete confidence in Randy Renado, our Butanding Interaction Officer’s, ability to see into both the immediate future and the turgid gray-green waters of the Sibuyan Sea.  “Now, look down” he would command shortly after my wife and I and our twin daughters had re-donned our masks, snorkels, and flippers, dropped over the side of our 40-foot wooden, outrigger banca, and had been guided to a patch of gently undulating water that seemed no different to us than any other patch.

But we would do so, and sure enough, three or four seconds later the hulking outline of a 25-foot whale shark — known here in the Philippines as a butanding, literally “gentle giant” – could be discerned coming towards us through the luminescent water, its enormous flattened head rhythmically swaying as its elongated dark checkerboard of a body passed five or six feet below us before disappearing back into the pelagic obscurity from which it had emerged.

It was indeed quite a sight, and we would see it a total of nine times that morning before the butanding, who tend to be early feeders, made themselves scarce.  And we had certainly come to the right place to see it.  Donsol, on the southeastern coast of the main Philippine island of Luzon, bills itself as “the whale shark capital of the world”, a boast generally accepted by virtue of the facts that the whale sharks here swim relatively close to the surface, the prime viewing season lasts the longest (February through May), and the odds of seeing multiple butanding on any given day is high.  For that, Donsol was named by Time Magazine as the best wildlife encounter destination in Asia in 2004.

So when it came time to vote on where we should go on our one excursion outside metro Manila, Donsol, had shut out the island resort of Borocay.  Fortuitously, the April day that we were there turned out to be better than average.  A British couple who had snagged the first boat of the morning had seen 12, while other groups saw between five and ten.  (In reality, you may actually be seeing the same butanding a number of times.  By comparing their size, however, we were sure that we had seen at least four separate fish.)  Sightings the day before, by contrast, had averaged only three as a steady rain had roiled the waters.

Like most, we had arrived in Donsol – or more accurately, the rough and tumble beach community just west of the fishing community of some 5,000 – the afternoon before, having caught the early morning flight from Manila to Legaspi City, where we had lingered to tour the historic devastation on the slopes of Mt. Mayon, arguably the world’s most perfectly shaped – and still smoking after all these years — volcano.

After getting sorted out at our hotel (the one we had pre-booked turned out to be full, and the substitute was decidedly less than satisfactory), we flagged down two motorized tricycles to take us the half mile to the joint WWF-Philippine Department of Tourism visitor’s center to hire our boat for the next day, pre-pay our visitor’s fee, and watch the mandatory 12-minute orientation video depicting just what awaited us the next morning.

The confusingly named whale shark is in fact the world’s largest fish.  But like baleen whales, it filter feeds on microscopic plankton and thus poses no danger to humans, unless they happen to be inadvertently slapped by its ten-foot tail.  Apparently whale sharks – predominantly young males — have been coming to these plankton-rich waters for years.  But it wasn’t until a team of foreign divers filmed them in 1998 that Donsol’s subsistence fishermen stopped seeing the butanding as a detriment to their livelihood (they would frequently destroy their nets) but as a potentially lucrative compliment.  A decade later, some 10,000 ecotourists make their way here every year to swim alongside the lumbering leviathans, and in the process, pump some P12 million into the local economy, a bonanza which, not surprisingly, has lured a fair number of two-legged sharks onto the scene.

To protect the cash sea cows, only snorkels and fins are allowed, and interactors are required to stay three meters away from the body — four from the pivoting tail — which, as we would discover, is not always easy to do as only a slight verve in the butanding’s course can put you right in its path.

To save even more time the next morning (the early boat catches the butanding), we also went ahead and rented our mask, fins and snorkels from one of the several independent operators who have set up shop on the grounds of the visitors’ center.  This turned out to be even wiser than we had intended as we discovered a small leak in one of our daughters’ masks that would have caused big trouble had we not discovered it until we were underway the next morning.

Fortunately for anxious interactors, Donsol has a second natural wonder, this one as miniscule as the butanding are majuscule, and this one visible only by night – fireflies.   After our twilight dinner of Bicol Express — rice topped with “bacao”, tiny and extremely briny shrimp – washed down with a couple of Red Horse Extra Strong beers, we boarded a small, rickety banca and set out for the mangrove-lined Donsol River.  For the next hour or so, we chugged up and down its overgrown banks, fascinated by the wee winged beasties creatures that congregated in certain trees by the thousands, looking to the squinting eye like an entire city flickering in the distance.

Despite having requested to be awoken early and having pre-ordered our breakfast, we were still about an hour late in getting to the visitor’s center the next morning.  But we needn’t have worried.  Our spotter, Jun, was spot-on that day, and we quickly made up for lost time. Within ten minutes of arriving in the interaction zone, Randy instructed us to get in the water.  Some hesitation in donning their equipment that just might have been caused by some lingering trepidation on the girls’ part caused enough of a delay so that all we saw of our first butanding was its ten-foot caudal fin (a.k.a. tail) sliding past us less than six feet away at eye level.   But that was enough to convince them – and reassure us — that as big as these fish are, there really wasn’t any danger involved.

As a result, there was no hesitation whatsoever getting into the water ten minutes later when Randy beckoned for our second interaction.  This time we were able to catch the whole show, which begins with what has been best described as an oscillating constellation materializing out of the obscurity.  That constellation, of course, is the top of the whale shark’s head, and you continue to see a river of stars for six or seven seconds until the unmistakable vertical tail signals that the show is over.

Back in the boat, we reveled in our collective success.  Our next objective was to see the mouth, a relatively narrow (unless the butanding happens to be feeding) six or seven-foot slit just below the leading edge of the head. To do that, you generally have to dive below the surface before the butanding comes into view – a scary proposition at first, but one that proved just as risk free as everything else.

Soon my wife and I were having nice, prolonged interactions, especially when we were able to pre-position ourselves parallel to the butanding so that the moment it did materialize, we could swim alongside, often for as much as two minutes before it eventually receded into the depths.  Meanwhile Randy took turns swimming with the girls so that they could get better sightings themselves – all while manning our cheap underwater camera.  And the butanding kept coming.  So successful was our spotter this day in detecting the telltale signs of an imminent interaction that Randy allowed several other, less fortunate, boats to share his spots, technically a violation of the one boat per butanding rule.

But even our luck wore thin as the morning wore on, and the crew, which had seen all this hundreds of times – grew anxious to head back in.  With reluctance we therefore abandoned our quest for an even ten interactions, and let them take us back to the visitor’s center, making sure — as we had clearly been instructed – that they all saw us tender our 800 peso tip to Randy.

To be sure, our three-day excursion to Donsol had been no weekend at the beach, at least not in the sense that idyllic Borocay would have been.  But judging by all the extra smilage that both our daughters and we have gotten out of it in the intervening year, we definitely made the right choice.  I mean, how long does even the best tan last?

Marshall S. “Mike” Berdan is an accomplished travel writer having published nearly two hundred travel articles in magazines and newspapers here in the U.S. and Asia — on destinations and activities all over the world.

← Career Journal: Where to Look for Jobs in 2011 (in India)?
10 Ways to Increase Your Chances of Going Global →

3 Comments on “A Whale of a Shark Story: Swimming with Gentle Giants of the Sea”