What Will It Take To Increase Study Abroad? 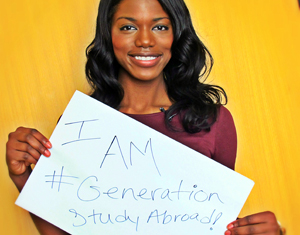 The Institute of International Education (IIE) wants hundreds of thousands more U.S. students to study abroad by the end of the decade. That’s a tall order, even for an organization considered to be the leader in international education exchange.

With the launch of Generation Study Abroad, a five-year initiative that seeks to build a coalition of leaders in education, business and government, IIE has set an ambitious goal of doubling the number of U.S. students studying abroad from 295,000 (Open Doors 2011/12) to 600,000. A brand new campaign logo was revealed to launch the kickoff.

On one hand, it doesn’t sound like that many students. After all, 2.6 million students graduate with baccalaureate or associates degrees every year; another 300,000 increases the total from 10 percent to 20-25 percent or so (if the current number of enrolled students remains the same). But the number of students who study abroad at some point in their undergraduate academic career has only been rising in the low-single digits over the past decade. If the current rate of increase were maintained, it would take nearly 20 years to reach 600,000.

How will the Generation Study Abroad initiative accelerate the process?

Daniel Obst, Deputy Vice President of International Partnerships at the Institute of International Education (IIE), admits it’s an ambitious goal and he recognizes that IIE can’t do it alone. He and his colleagues believe that it’s up to a much broader group — education, private sector and government — to better prepare the coming generations for the interconnected global world. Obst, a native of Germany, knows first-hand the value of study abroad having studied in the U.S. and UK and now works in NYC — he is passionate about the need for study abroad.

“By creating and leading a coalition of diverse yet like-minded players, Generation Study Abroad plans to effect change on a national scale so that study abroad will eventually be viewed as – and become — an essential component of the college experience,” says Obst. “Generation Study Abroad will work to change the culture around study abroad so that the question is not whether a student will study abroad, but rather when and how.”

“Early on in the process, we wanted to ask every institution to double its numbers,” says Obst. “But we quickly realized that each institution has its own set of challenges, and it would be much more productive if we let them set their own goals.”

IIE’s strategy seems to be working. In just a few weeks, more than 160 higher education institutions from 41 U.S. states have already signed the Generation Study Abroad Commitment, including large state and private universities, liberal arts colleges, community colleges and historically black colleges and universities and other minority-serving institutions. And according to Obst, “New pledges are coming in almost every day.”

All commitment partners are invited to display the new campaign logo on their website. Once they hit their pledge, they will receive a Generation Study Abroad badge to display as well.

But even if hundreds more join the commitment, how will Generation Study Abroad achieve double-digit growth? It’s useful to go back to the numbers, which Obst did, and offered the following projected scenarios:

These projections are impressive and illustrate that IIE is thinking creatively in terms of solutions. But the commitment partners also need to do the same in order to “shift the paradigm” in the way study abroad is viewed so as to actually make it an integral part of an undergraduate degree. This includes addressing the issue of cost, which was cited as the number one reason by students for not going abroad in the research I conducted when writing A Student Guide to Study Abroad. It also requires dealing with the issue of coursework, making it easier for students to go abroad and transfer credits, even if that means students are going on (often much cheaper) reputable programs not directly affiliated with the campus. The lack of diversity needs also to be addressed head on. Study abroad is not just for Caucasian women, by far the largest demographic group who go abroad; study abroad should be available for all students, and that’s going to take some work.

According to Obst, “IIE wants to ensure that every student — no matter his or her race or ethnicity, socioeconomic background, gender or academic major — has the opportunity to study abroad.” He adds, “We know we face difficult challenges, but we will work with our commitment partners to develop innovative ways to do so and then share these best practices across the board.”

Some of the institutional commitments already made include:

The saying “a rising tide lifts all boats” seems to accurately exemplify what IIE is doing with its Generation Study Abroad initiative, and it deserves credit for building a coalition in what can be a fiercely competitive industry. Instead of commissioning a study or simply telling institutions what to do, Generation Study Abroad has issued a public call to action, challenging all types of organizations to better prepare young people for the future. The goal is ambitious, yes, but it looks like they have what it takes to accomplish it. I’ll certainly be rooting for them.