Understanding and Dealing with Culture Shock

As college students who are studying abroad take the time to pack and plan for their time abroad, I’d recommend they also think about — and be prepared for — culture shock.

Culture shock is one of the most widely discussed and often misunderstood aspects of any international experience. Technically speaking, culture shock is the confusion, disorientation and emotional upheaval that comes from immersion in a new culture. For example, you may be tired of using frustrating and confusing public transportation that doesn’t seem to work well. Maybe you’re exhausted from making yourself understood all the time and just want to speak with someone like you. Even just standing out, looking foreign, bothers many people abroad. These minor problems balloon into massive problems. You feel like an outsider and may even be depressed. You are experiencing culture shock.

Culture shock typically follows a three-phased cycle starting with a honeymoon period when everything feels grand. But fabulous turns to frustration, depression and confusion, often triggered by an event involving seemingly minor cultural differences. All usually ends well, however, as the recovery phase restores equilibrium after you’ve regained confidence and learned to appreciate the culture as a whole. A little bit wiser, you’re able to move on. International newbies are often either overly optimistic (“I won’t have any trouble adjusting”) or overly pessimistic (“Everyone takes six months to get used to the basics before they can do anything productive”). 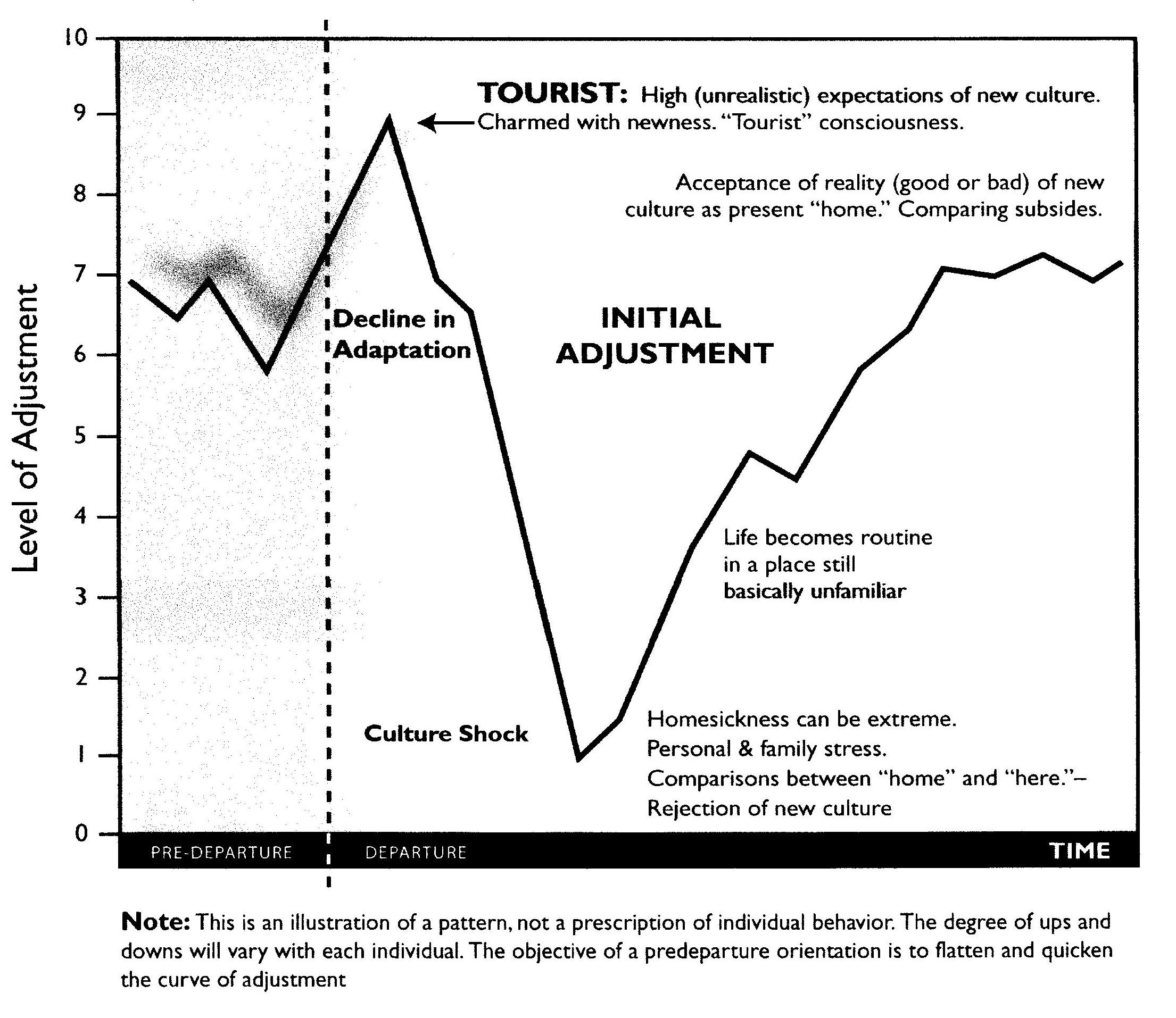 You may have heard some people say that they don’t experience culture shock. Well, odds are, they did, but perhaps didn’t recognize it as such, or they’re too embarrassed to share their stories. Worse still, they might not have immersed themselves in the local culture, and so were never exposed to it to the point where they had to confront their discomfort in the first place. That would be sad, and we certainly don’t recommend that you take that approach. Culture shock is a learning experience and leads to broader perspectives, more tolerance, and greater appreciation for your new culture and your home culture. It’s important that you prepare for culture shock, and learn how to deal with it. Doing so is one of the best ways to experience the deep personal growth of life abroad, as so many others have. Here are some tips on dealing specifically with culture shock:

In fact, almost everyone who spends a significant time abroad experiences some degree of culture shock with every major cultural transition—whether moving to a new culture, or dealing with a new cultural group or sub-culture at home. You can experience a type of culture shock if you are working on a project on your home campus with a group of diverse people from different backgrounds, or returning to the U.S. after time abroad. Whatever your encounters are, you will need to develop coping mechanisms.

Once you’ve spent time in cross-cultural environments, you will learn to recognize your own pattern of adjustment to new experiences. You will put to good use the coping mechanisms that work best for you. By giving yourself the space, time, and other support you need to adjust, you can smooth your transition and develop your own culture shock absorbers. This adaptability is important because you will need to cope and move on—not let these encounters stymie your growth or experiences—so you can continue to study and eventually work productively across cultures.

That said, if you find that your case of culture shock has become a consistent, awful strain that gets worse rather than better, take it as a warning sign, and consider reaching out to your sending program or local adviser for help. Most students find that like subsequent ripples from a stone being thrown in a pond, the height and frequency of culture shock waves should diminish with time. This is why many students wish afterwards that they had stayed abroad longer; they recognize that it does get easier with time. But in the beginning you’ll need to learn to adapt.

For more information on culture shock check out the popular Culture Shock! series.

← Friendships Across Cultures
Living Abroad vs. the Constant Traveler →