The Importance of Raising Global Children 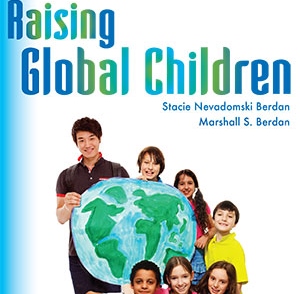 In today’s interconnected global world, children must be taught to become globally competent adults to succeed. According to the National Research Council, one of the numerous research reports on this growing topic of discussion, Americans’ “pervasive lack of knowledge about foreign cultures and foreign languages threatens the security of the United States as well as its ability to compete in the global marketplace and produce an informed citizenry.”

I compare this to when I lived and worked in Hong Kong in the late 1990s, before my daughters were born, and reflect on how much better prepared Hong Kong professionals were to work globally – because they had to be. Their preparation began in elementary school with Cantonese, English and Mandarin and a truly global curriculum. It’s the same for many countries around the world, and this firsthand experience convinced my husband and me that we needed to open the world to our daughters somehow. For us, instilling global awareness in children is one of the critical elements of a well-rounded education and intellect that is equally important to excellent nutrition and physical fitness, spiritual fulfillment and emotional strength and stability. In our opinion, raising global children is not an option.

Contrary to popular belief, raising global children doesn’t have to take a lot of time, and it doesn’t have to cost a lot of money. It’s not just for some families; it is for every family. But how to accomplish it is hardly self-evident. That’s why we decided to write this book, Raising Global Children: Ways Parents Can Help Our Children Grow Up Ready to Succeed in a Multicultural Global Economy, published by the American Council on the Teaching of Foreign Languages (ACTFL). Written by parents for parents, this combination parenting-advocacy book is the first of its kind to detail what raising global children means, why global awareness is important and how to develop a global mindset.

Supplementing the dozens of survey and research reports produced by think tanks and academics on the topic, we conducted our own quantitative survey of more than 1,000 people across a wide variety of geographic locations, ages, income levels and educational backgrounds who self-identified as global thinkers. Our findings include:

This last statistic – 98% advised foreign language learning as early as possible – is astounding, mostly because it contradicts the reality in American schools today. Only 16 states have any kind of foreign language requirement for graduation with most instruction beginning after age 13 or 14, precisely when research shows that the ability to learn foreign languages begins to decline. Moreover, other traits identified as critical to developing a global mindset, such as open-mindedness, ability/willingness to listen carefully to others, interest in other cultures, flexibility/adaptability and curiosity, are also harder to teach later in life. These are life skills, attributes that are best taught beginning in childhood by parents at the very earliest stages of their children’s lives and then complemented by teachers through schooling.

The process of raising global children should begin as early as possible. And some American parents have been doing just that.

In Raising Global Children, readers meet a diverse group of parents and teachers who have made raising global children a priority and who share both their successes and their failures because they want to spread the word. Among them they will meet:

As a country, we must instill in our children the interest to learn about the world early on, so that they have a solid foundation on which to build as they transition to teens, college students and young professionals. Parents and early-childhood educators have far greater influence on how open-minded children are and how curious they are about the world than do college or graduate-level educators. The good news is that research suggests that early intervention by parents and educators can make a difference in developing those crucial psychological skills and aptitudes.

In writing Raising Global Children, I not only want to share tips with other parents, I hope to inspire a groundswell of concerned parents, teachers, administrators, politicians, professionals and business leaders to work together to advocate for greater global awareness. We’re going to need every person, platform and blogger doing his or her part to make an impact on the national scale. But it’s a worthy goal: The future of our children begins with us.

Raising global children is one of the most important things that we, as parents, can do for our children – and for the long-term prosperity of our country. Working together, teachers and parents can raise global children, expanding their personal horizons and opening up a world of personal and professional opportunities. Please join the movement: Follow me on Twitter and “like” the Raising Global Children Facebook fan page. Together we can make a difference!

Linked to the My Global Life Link-Up at SmallPlanetStudio.com

2 Comments on “The Importance of Raising Global Children”