Studying Spanish Along the Pan-American Highway 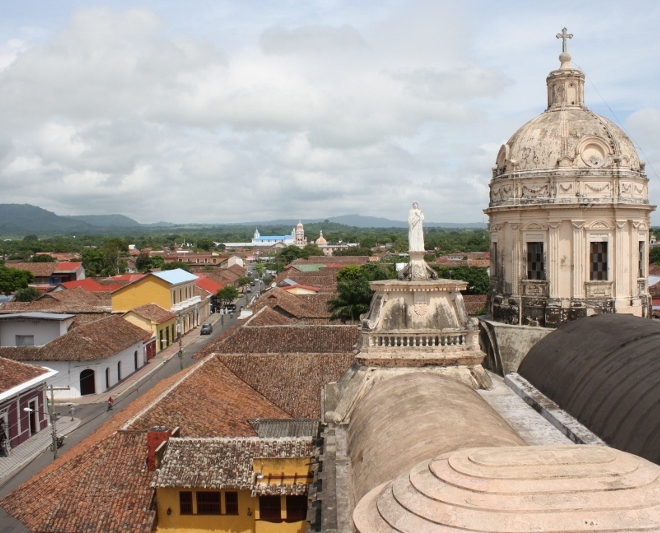 My family and I just returned from a few weeks traveling through Central America. Originally, we planned on going to Greece and Turkey, but the economic strife, strikes and riots in Greece had us changing our minds – and scrambling for a Plan B.  I wanted a destination that offered warm ocean waters and sunshine, wasn’t too crowded with tourists, was international to feed my need for cross-cultural stimulation, yet one I hadn’t been to.  Asia was a little too far (plus we lived in Hong Kong for years and explored the region in depth); Africa was either too hot or required immunization shots over time we didn’t have.  Europe is, well, too popular in the summer, and most of South America too cold.  A few years back, we had been to Guatemala, Belize and Costa Rica yet that was it; not much more exploration of our neighbors south of the border. We decided on a short tour of Central America – Nicaragua, Costa Rica and Panama – and  realized this would be a great opportunity to teach the girls how to travel.  We packed only what we could carry – backpacks for me and my husband, day packs for the girls – downloaded eBooks from our local library on my iPhone and iPad, and took one guidebook.

We flew into Managua, Nicaragua, and planned to leave from Panama City. We didn’t have any reservations or premade plans; we were winging it completely – the way Mike and I used to pre-kids – and like so many other backpackers do: for the spontaneous adventure.  Although we met plenty of backpackers along the way, we didn’t quite meet another family like ours.  Most of our fellow travelers were on a 2-month journey and were young and single, traveling alone or in small packs.  We only ran into other family travelers at a few popular tourist hot spots.

And so Nicaragua’s budding “authentic adventure” theme came to represent our travels over the next few weeks. As part of our adventure, we ate local food, traveled like locals (often on “chicken buses”), and stayed in (mostly) locally-owned inns.  We swapped stories with fellow travelers, picking up tips and guiding our itinerary.  We taught the girls currency exchange and how to travel safely and smartly.  The weather was sunny; the water was warm.  My criteria were met – with the added bonus of daily Spanish language use.

My daughters have taken Spanish for six years now – about 20 minutes a day since kindergarten.  Like many students, they didn’t really appreciate Spanish class and the value it offered. Being in a Spanish-speaking country changed that from day one.  They began to read the signs in the airport and listened as we negotiated with a taxi driver to take us downtown.  They quickly learned that traveling was a great way for them to actually use what they had studied so far.  It boosted their confidence as it surprised them how much they could communicate. They ordered food in restaurants, chatted with local people we met and were able to read a percentage of signs and understand those guides who spoke slowly. They even used Spanish with a surf instructor in San Juan del Sur.

Spanish is the logical choice for most American children.  As a romance language, Spanish is easier for English speakers to learn than, say, Mandarin.  We have a Spanish-language education infrastructure in our school system with teachers, curricula and studies to improve efficacy.  Hispanic population is growing across the U.S. and, according to Pew Research Center, by the year 2050 29 percent of the population will be Hispanic. As the U.S. increasingly integrates economically with Latin America, Spanish will become essential.

My daughters are lucky for we live in a school district that has been fighting for foreign language for 50 years – fighting against budget cuts and for improved curriculum. Spanish is mandatory beginning in kindergarten, a second language can be picked up in seventh grade; and in high school the selection widens to include classical languages as well.  But for many American students, language programs are being cut.  For most others, the Spanish language program is not intensive enough; perhaps it’s only a two-year high school requirement or only 30 minutes a week, which leads many parents to wonder why it is being taught at all.  But knowledge of and appreciation for another language and culture will help our children grow up ready for a complex and multi-cultural global economy.

In an effort to help my daughters on their way to their all-important fluency, I’ve asked several foreign language experts what we can do.  Their response: immersion beginning sometime during the middle school years.

According to the ACTFL, immersion programs are effective and inherently more interesting for the student by accomplishing two goals at once: language acquisition and content learning. And so we’re seriously considering an immersion stint in Central America next summer and this summer we got our taste of a few possible destinations.  I’m not sure whether we’ll do a language-study program, a volunteer-language combination, or possibly create our own combination of local classes with some local fun.  I’ve asked two of my nieces about joining us as well.  The older of the two, who will be off to college in the fall of 2012, says, “I’ve studied Spanish since I started high school, and I plan to continue in college.  An opportunity like this would take my language skills to another level before I start college – plus it would be so cool to live in a foreign country even if just for a month!”

There’s no shortage of language programs being offered, and we checked out a few on our travels.  Right now, we’re zeroing in on Central America due to proximity, off-season summer timing and a manageable price – in case we plan to repeat this adventure for the next few years.

In my next few posts, I will be exploring summer immersion programs in Guatemala, Nicaragua, Panama and Costa Rica.  Note that these places and programs are ones that we are considering; I can’t recommend any since I haven’t experienced them first-hand.  But I thought that many of you might have some ideas to share and others might be interested in learning along the way.

So does anyone have any suggestions based on programs you’ve attended?

2 Comments on “Studying Spanish Along the Pan-American Highway”