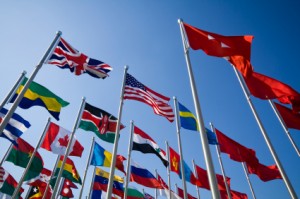 By Guest Blogger Laura Cubanski
A few years ago when I was in Brussels, I had an interesting encounter with a little old lady in the ladies room.  She was sitting in a chair just inside the door, and it was her job to collect payment from women who used the public rest room.  I was brand new to Belgium, and unaccustomed to the pay-as-you-go policy.  The attendant saw my confusion and explained, or tried to, in French how much I needed to pay.  I could not understand her, so she switched to German.  When that failed as well, she spoke to me in clear English, and helped me pick out the correct change from my change purse.   I felt like a complete idiot.  And yet, I’m not one.  By U.S. standards, I’m highly educated (with a J.D. from UCLA School of Law) and I had worked for more than 3 years at my state’s Capitol, as Senate Counsel, advising state senators on the enactment and amendments of state laws.  I was respected, and my opinion mattered at home, yet here, in Belgium, I couldn’t find my way through the bathroom without help.

Obviously the 4-week French course I took (meeting twice a week) before my trip to Belgium was insufficient.  Of course it was.  People travelling abroad simply cannot know the ins and outs of other countries without significant study and ongoing absorption.  I believe strongly that that education must begin in childhood.  Learning foreign languages and cultures is critical for American children.  It doesn’t take an expert to see the increasingly global nature of the business world, but it isn’t just about business.  Americans now travel for leisure more widely and more often than ever before

The importance of foreign language programs in American schools, therefore, cannot be emphasized enough.  This point is understood in my town where children learn Spanish from the time they begin first grade. In seventh grade they are allowed to switch to French if they want, and many are given the opportunity to learn Russian as well at this age.  In high school the selection increases, including Greek and Mandarin Chinese.  I recognize that these are costly options that would seem prohibitively expensive in some districts.  However, given the increasingly global character of our lives, it’s scary to think that some American children are being left behind because of budget cuts.

My children have friends from India, China, Italy, Thailand, Spain and Peru.  That’s just from living in our town; it’s not that we’re world travelers.  But because of the language programs my girls have participated in, their minds are wide open to people who are different from themselves.  They want to learn about other countries, and what it’s like to live there.  For example, my oldest was so excited when she realized that she could think in Spanish as well as English.  I am so thankful for that and for other small revelations that they are becoming global citizens.  Another example was when we were in an American airport recently, we needed assistance, and the people available spoke only Spanish.  My daughter, age 15, was able to translate both my questions and their answers.  A priceless gift for me.

I don’t have a degree in international relations or global economics.  It just seems like common sense to me.  Americans are coming in contact with people from all over the world, both here at home and while travelling.  Foreign language education can only help facilitate understanding among diverse cultures.  We need as many tools as we can find to eliminate the “us vs. them” mentality that divides us internationally and within our own borders.  Working together for solutions, rather than fighting enemies, is the obvious choice.  But to work together, whether in the business world or for world peace or peace on the playground, we need to build a greater understanding and facilitate communication among and across world cultures.  Foreign language education in American schools is the necessary first step.