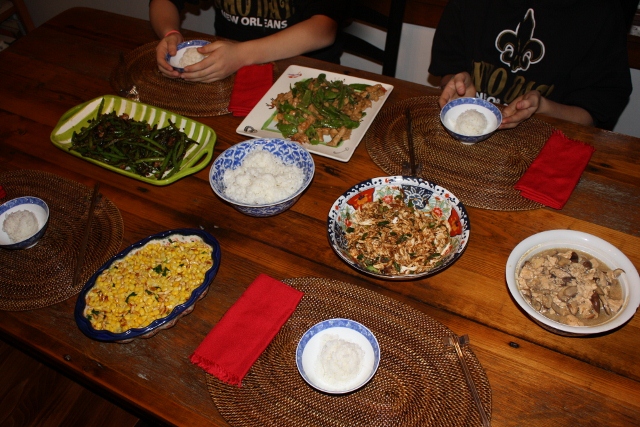 I’m always looking for ways to enrich our family life with cross-cultural experiences, specifically to interest my twin daughters in the world beyond our borders. So when I received an email from a good friend, Scott Seligman, telling me about his most recent publication co-authored with accomplished Chinese cook Sasha Gong, The Cultural Revolution Cookbook, I was intrigued. A few days later, my daughter asked to go out for Chinese food (I’d been putting her off, see below), so I decided to make it an international foodie experience coupled with a significant history lesson.

My daughters were excited about the adventure. First, they knew Scott, who I first met during my time in Hong Kong, who left the corporate whirl years ago and has published quite a few books on China-related topics.

Second, we were all going to learn together. Despite my living in Hong Kong for three years, I never learned how to “cook Chinese.” Hong Kong is an Asian food-lover’s paradise and so we did what busy Hong Kong people do: ate out a lot indulging ourselves in fabulous foods from around the region and learning to differentiate the many regional different flavors of China.

Third, we were going to have Chinese food! We’re definitely a foodie family. We love all kinds of food, especially dishes that require fresh, local ingredients and are loaded with healthy nutrients. But that’s not exactly what comes across when you’re reading a Chinese restaurant menu in a suburban town, and so I’m usually reticent to “go out for Chinese” unless we’re in NYC, San Francisco, DC – or I get a hot tip from a friend who knows Chinese food.

Before we began, though, I read a few of the book’s reviews (all positive) and one in particular by Leslie Forman, which noted how easy and fun the recipes are. I still had one major reservation, though: My experience with cultural revolution food was through He Tu De, a restaurant in Beijing that focused on the more “exotic” recipes that included insects. I’m happy to report that none of these recipes contain ingredients that would turn off a typical American palette.

We began by paging through the recipes, which are organized by main ingredients, such as vegetables, poultry, pork. Each recipe is accompanied by a snippet of information about the Cultural Revolution and a mouth-watering photo. I’ll admit that we made most of our decisions based on the photos, but we checked the list of ingredients, too. We decided to cook a banquet for four and so chose five dishes that would complement each other while satisfying our tastebuds: Sliced Pork with Snow Peas, Tofu with Mushrooms, Shredded Chicken with Peanut Sauce, Dry-fried Green Beans, and Stir-fried Corn and Pine Nuts.

The recipes were all straightforward and easy to follow with basic household ingredients – nothing fancy here – and, for that one recipe that called for oyster sauce, there was a recommended substitution (soy sauce plus sugar). We made our list and bought the fresh meats and vegetables at our local Whole Foods. Reviewing the recipes, I realized that all of these dishes required only a few minutes of actual cooking time, so we needed a master plan. We agreed to divide and conquer, prepping all the recipes before doing any cooking; this took us about 45 minutes.

Then the cooking began! Although each recipe calls for a wok, we used various sauté pans and pots. And instead of standard vegetable oil, we used walnut oil as a healthy alternative. Connie took charge of two dishes: one the quick stir frying of pork with snow peas, as well as the slow stirring of tofu and mushrooms (we used a combination of portabella and shitake). Betty, who had enjoyed toasting the Turkish pine nuts, took charge of the corn dish (in which we used defrosted frozen corn), and made sure the rice was perfectly steamed. The shredded chicken dish required the most preparation, and the peanut butter needed to be melted with sauces mixed in right before serving (a relatively easy job for Mike who was on standby near the microwave). The most time-consuming dish was the dry-fried green beans. I didn’t anticipate that it would take about 15 minutes to properly fry more than a pound of beans in two batches and so the smoke was rising and the garlic close to burning (the downside of not using a wok) before I pulled the dish together with the optional ground pork added, which gave it a nice finishing touch. In this particular recipe – and several others throughout the book – the authors tell us tidbits of history, such as that ground pork was hard to come by during the Cultural Revolution. 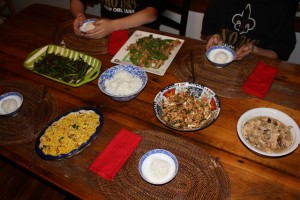 These colorful additions of historical context sparked conversation as we sat down to a traditional Chinese table set with chopsticks and a bowl of rice for each, and the dishes served family style. Although I admit we focused on the delicious dishes at hand – every one of them a tasty treat – we also discussed China then and now. It was rich family experience on many fronts.

Although we only chose five recipes, there are many more that we’ll be experimenting with over the coming weeks. A few will most likely become part of our repertoire of favorite dishes that we’ll use to complement non-Chinese meals.

The Cultural Revolution Cookbook is available through Amazon.com.

← My Bookshelf: Catherine the Great Portrait of a Woman
The World has Changed: Foreign Languages Make a Huge Difference →